Yoga may be considered very challenging. The challenge is to your will power. It is a challenging journey of self-improvement.

Most types of activity require the body to make fast forceful movements. They have repeated actions, which often lead to tension and fatigue. Yoga poses on the other hand, involve movements, which bring stability and energy to the body, the senses, the mind, and the consciousness. 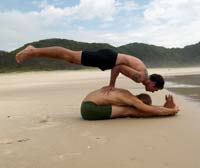 In yoga practice, the brain is quieted; the senses are stilled, generating a calm feeling of well-being.

With practice, the student of yoga learns to treat the brain as an object and the body as a subject. Energy is distributed from the brain to the other parts of the body.

The brain and body then work together and energy is evenly balanced between the two. No other form of exercise so completely involves the mind and spirit with the body, resulting in total well-being. Other forms of exercise address only particular parts of the body. You only enter the mental gym when you practice yoga.

When practicing yoga, strength and power play separate roles to achieve a perfect balance in every part of the body, as well as the mind. After such stimulating exercise, a sense of rejuvenation follows. Many forms of exercise require physical strength and endurance and can lead to a feeling of fatigue after 30 minutes of practice. 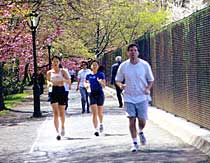 Many such exercises improve energy levels by boosting nerve function, but ultimately, this exhausts the cellular reserves and the endocrine glands.

Toxins build up in the body, and blood pressure and pulse are increased. Ultimately, the heart is overworked.

An athlete’s strong lung capacity is achieved by hard and forceful usage, which is not helpful to preserving the health of the lungs.

The incorporation of yogic stretching in conjunction with other types of exercise will greatly aid in minimizing any or all potential aliments that may / will occur over time from these other forms of exercise.

What’s the point of trying to get into shape and ending up totally out of shape. Short term pleasure leads to long term pain!