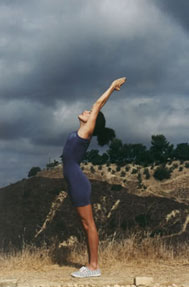 All of these valued yoga techniques combine to effectively work with spiritual, mind-body energies to reduce stress, detoxify and regenerate the body, reverse aging, eliminate disease, focus and clarify the mind, and gently remove emotional scars (samscaras) held in the body.

The result is a sense of manageability, well-being, and contentment in live. Although Yogi Marlon hopes to interest you in the deeper facets of yoga, you can be assured that her teaching and yoga DVD’s do provide low impact exercise.
Training:

After only nine months of very dedicated yoga practice, Yogi Marlon’s instructor suggested she commit to an upcoming teacher training program in New York. During the following 1 1/2 years Marlon studied briefly with the founder Kavi Yogiraj Mani Finger, and mainly with his son Yogiraj Alan Finger.

Yogi Marlon sustained her long-standing personal interest in reading spiritual literature. To that

reading list she added texts on yoga and ayurveda, as well as ancient scriptures translated from Sanskrit to her independent study program.

Before relocating to California, Yogi Marlon began practicing yoga and studying with her most significant teacher, Yogiraj Rod Stryker, with whom she continues to study today. She is also grateful for the knowledge she’s gained from the following teachers:

Yogi Marlon had been initiated in formal ceremony as a Kriya yogi. She is certified yoga teacher through both Pure Yoga and The Yoga Alliance. She is a member of the California Yoga Teachers Association.

As creator, producer and star of the show "Yoga Time with Marlon" her yoga instruction has aired on cable TV, reaching up to 11 million households weekly. Her company, Shiva Entertainment, is currently developing a cable TV show on organic cuisine and another on holistic living.


In the form of 6 DVD’s Yogi Marlon has created 6 distinct yoga curriculums to appropriately teach yoga to the beginner student and the intermediate or advanced yoga practitioner.

Marlon is available to teach individuals, small groups, and classes of all sizes on the subjects of yoga practice and philosophy. She consults individuals, homeowners and businesses on how to transform their spaces into holistically supportive, healthy environments.

A Word from Yogi Marlon:

“My intent is to allow yoga to cultivate awareness and deepen mastery of Self so I may reach my highest human potential as a co-creator with the divine. I began my study in yogic arts during the most emotionally challenging time of my life. It was the one thing I was doing that relieved my depression and sense of overwhelm, so I was in class four times a week as soon as discovered yoga. What I now realize is that yoga helped me to see the most essential and unchanging part of myself, which created the stability I needed to prosper. Through yoga, I experienced myself through my soul, not my senses. It is my belief that you can achieve this too.”

Good luck! Good health and happiness to you!

- Yogi Marlon
Please visit my site if you like for more information.