I went along with my film crew to a Satsang the other night; below I’ve  posted a video that shows a small part of it (I’m the one reading the words as it’s all pretty new to me). There is a bit of confusion and misinterpretation about what Satsang is in the mainstream, which I interpret as the pre/trans fallacy, so here goes a bit of a blog pitching some philosophy to clarify.

Ken Wilber, a leading American philosopher who has written extensively about many subjects, human development being one of them, coined the phrase “pre/trans fallacy.” Ken Wilber purports that many claims about non-rational states make a mistake he calls the pre/trans fallacy. According to Wilber, the non-rational stages of consciousness (what Wilber calls “pre-rational” and “trans-rational” stages) can be easily confused with one another. I have to agree that the pre/trans fallacy is one of the hardest things to get your head around – especially when looking at it from a rational level (which can be generalized to include the mainstream western mind).

Check out the video below, which is a chant from this May 2010 Satsang that I attended – if you’re on my list you will get an email when the whole thing is online (it’ll be free for members and makes for another consciousness expanding tool you can add to your box). It’s about 90 minutes and includes meditation, call and response/devotional chants and some philosophy.

I had never done a Satsang until Ram – the guy playing the harmonium and leading it -  set the yoga center up in town here in 2008.  (Yeap, that is 10 plus years for me without knowing about this vital aspect of yoga!)  Now that I have a better understanding of developmental psychology and growth I get the whys and the benefits that it can provide.

Ok, so “non-rational” states… what are they?  To understand this you need to understand about Growth as it relates to the human experience. Here is a video post on Yoga and Growth which gives a part of the picture.
Eastern and Western Developmental growth models all tend to look at growth as something that happens by and through “stages.” Whether growth be viewed through the lens of the Chakras, the Koshas (Annamaya kosha, Pranamaya kosha, Manamaya kosha, Vijnanamaya kosha, Anandamaya kosha )or the western developmental growth models, for example, Jean Gebser (who looks at growth through the archaic, magic, mythical and mental structures, and into the integral stage) and many, many others. Here’s a chart of many philosophers mapping lines of development through levels, or stages, of consciousness that will give you an idea. 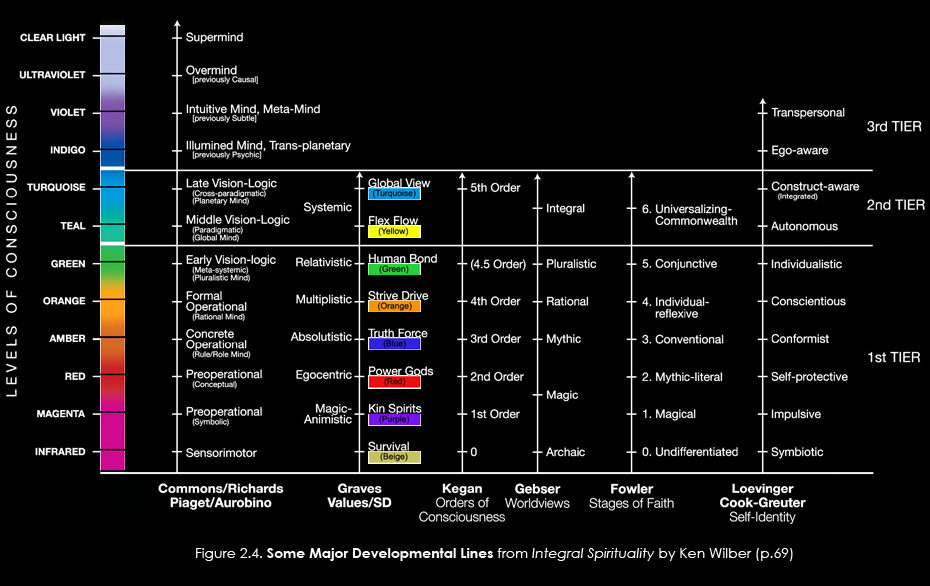 Al has been a student of Yoga for the best part of 2 decades. Loves to surf, play beach volley ball and explore the deeper nature of reality. Fancies himself as a bit of a philosopher. Loves to make videos and is the founder of the Yoga.org.nz site.

END_OF_DOCUMENT_TOKEN_TO_BE_REPLACED

28 Responses to Satsang and the pre/trans fallacy.